Like many of you, I travelled into the path of totality to view the August 2017 North American eclipse. We’ve all heard plenty about it, so I won’t go on and on. However, I’ve tried to describe the event and always seem to fall short. The pictures and videos that so many across the country have taken help, but their was more to the experience. The corona was more brilliant. The atmosphere was more gauzy. And, the feeling of awe simply cannot be conveyed.

I viewed the eclipse through a pair of regular eclipse glasses as well as some 20×60 binoculars fitted with filters.

I shot a timelapse with my Canon 6d and a 50mm lens and no filter. I shot photos with my Canon Rebel t3i and a 300mm lens with a solar filter, except during totality and a minute or so after (with live view, not looking through the viewfinder).

Here are the images I managed to capture.

This is a composite of various shots taken with the 300mm lens in sequence. The top row were shot with a solar filter and the bottom without.

This is the time lapse. 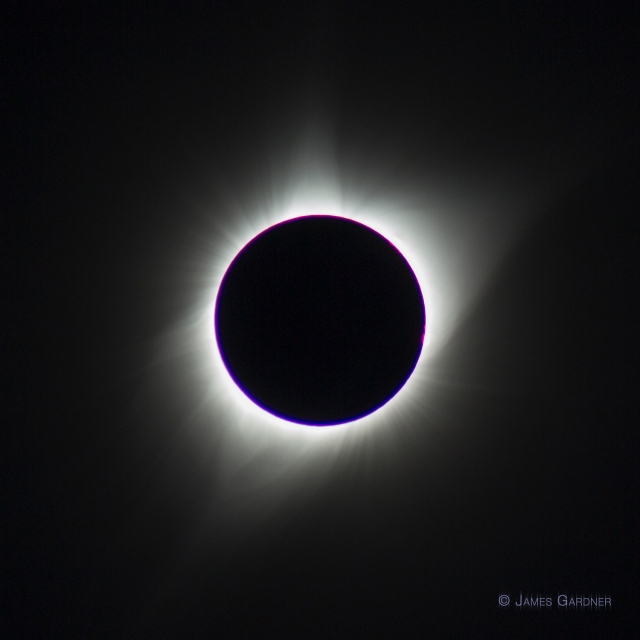 Here is the corona. You can see a little chromatic aberration caused by the lens. Unlike some of the shots that include some direct light from the sun’s surface and therefore create flaring effects through the lens, the patterns of light seen here appeared to be inherent to the corona.

This one I’ve over exposed slightly to show detail on the outer edges of the corona.

This one I digitally enhanced to show a little more detail of the patterns in the corona. The quality of the image suffers for it, though. 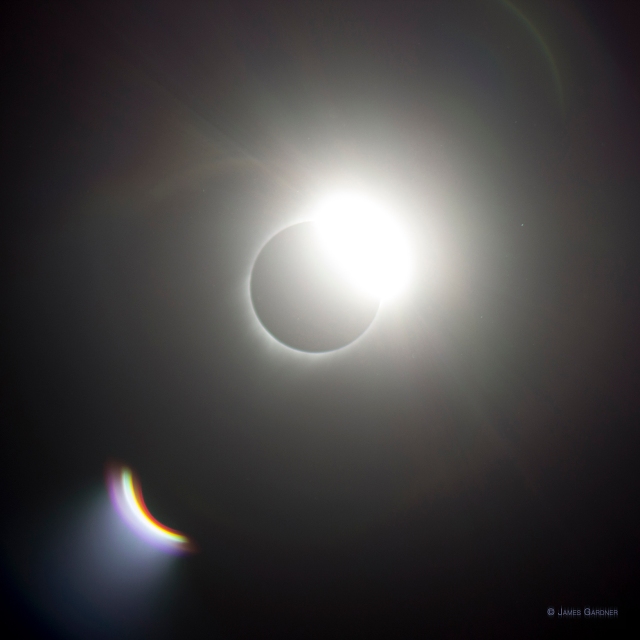 Here is the “diamond ring” the suns surface peaking out is what creates this effect. It was so much brighter that even with maximum shutter and aperture stopped all the way down it was still blown out in a largish area. On the other hand using the solar filter at this stage would only show a tiny blip of surface with no corona or diamond ring. I think having an ND filter on hand for this shot would have improved it. But, that would be just another thing to be fiddling with while you missed the experience 🙂

Here, you can see the faint ring and emerging crescent shape as the surface of the sun poked out more. Again, that crescent area was so bright that it is blown out. in reality the crescent at this stage was awfully thin.

This one is exposed to show something like what was visible through eclipse viewing glasses.

Here I’ve cropped in on the last image I took before totality. If I had removed my filter prior to this shot it would have shown the “pearl necklace” effect. I did not. It was my first total eclipse. You can see how the light is interrupted by irregularities in the moons surface.

Despite the traffic and travel, the experience was completely worth it. If I manage to make it to another I think I’ll try to be prepared to capture more of the images I like, while having even more time to enjoy the event.