I keep coming across the phrase “Art for art’s sake”. I don’t believe it one bit. At least not from the people who are saying it.

Usually, I hear the phrase used by acquaintances studying visual arts in the studio area. That means they are learning contemporary art—art that doesn’t have to look like something, but has a deeper message which gives it meaning and purpose… or it has no meaning which can also give it meaning and purpose.

I get the feeling that “art for art’s sake” is the way they dismiss the large number of people who don’t appreciate what they make. Basically, they are saying “It wasn’t made for you, so I don’t care what you think of it.” The phrase would tend to indicate that they don’t care what anyone thinks of it, because it was only made for the sake of being made, not for an audience—this is the part I don’t buy. If that is the case, why are they trying to get into galleries? Why do they want to have shows or take part in exhibitions?
They care an awful lot about what certain people think. But why do only certain people get to decide what good art is?
Not everyone will agree on everything, but if a work of art is really great, shouldn’t a lot of people be able to feel what you are conveying, and appreciate the skill with which you execute it?

Fine art sometimes seems like a snobby society where food that tastes like garbage is passed off as a sophisticated acquired taste. If you don’t like it, it is because you aren’t cultured. Well sorry. I’d rather have a gourmet hamburger than cheap caviar.

I am certainly not saying that all contemporary or non-representational art is bad. I’ve seen some pretty amazing things that didn’t look like anything, but those were the ones you didn’t have to be trained to appreciate. those were the ones where I didn’t feel like the artist was trying to convince me that there was meaning—I could feel it already there.

So, back to art for art’s sake. I realized a while back, that the only people making art for art’s sake are the ones that “Fine Artists” denounce as hobbyists. Art for art’s sake comes from people like Emily Dickinson, who produced nearly eight-hundred poems, only a handful of which were published during her life. I think the watercolor painting your aunt did of her cat would probably also qualify.

(If you were wondering, I am the author of abstract image featured above.)

Since the icebergs are finished, I’ve been painting the backdrop. Unlike my previous image with the dock, this backdrop will play a greater visual role in the scene. It includes the seal hunting schooner from the story.  There have been some challenges painting it.  The backdrop is 18″ wide, and therefore, decently sized for a portrait or something.  However, the ship turns out to be a little small for my painting style.  I think it will do, but it got pretty uncomfortable at times.

Below is a quick test shot with the icebergs. I still have to work out the lighting, the snow on the bergs may need some cooling.  If I can’t do it with light, I might just have to whip out the paint.

Writing that made me want to try overlaying cooled versions of the bergs over the originals in photoshop. I only spent a couple minutes at it, but it definitely comes closer to my vision.  I’ll be keeping that in mind for the final shots. 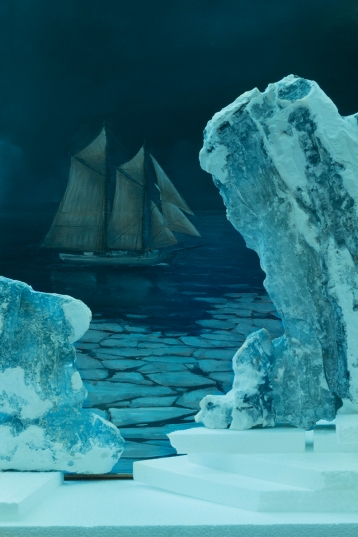