These are images from my recent show in Gallery 303 at the Harris Fine Arts Center. The project illustrated the story of an adventurer shipwrecked and stranded on arctic ice. All of the images were created by building miniature models, sets and props to photograph scenes from the story. Each prop and set was designed and built specifically for the scene in which it was used. I have included a few individual pieces as they were hung at the show, but I will be posting individual images of the whole series later too. Hope you enjoy. It was a lot of effort, but a lot of fun to spend five months on the ice with my character. 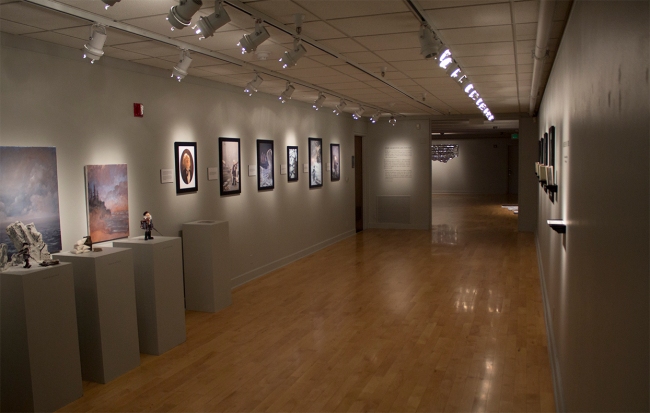 Lighting in the Gallery was a little harsher for my models than would be optimum, but their primary purpose was to be photographed in my studio for the illustrations and they looked great like that, so I won’t complain.

All my dimensional illustrations for the arctic adventure are finally finished. I am pleased with them. A series of prints as well as some of the original models are on display right now in Gallery 303 in the Harris Fine Arts Center on BYU Campus. I’m holding a joint reception on November 9th from 5 to 7 pm with Rebecca Lynn who is exhibiting her relief prints.

So happy to be finished, and excited for what is to come.

Below is one of the finished images. This is when our hero finally struggles ashore after five months surviving on the ice.