I wanted to add something with a sort of fantasy battle bent to my portfolio. The concept was a warrior carrying a standard or banner behind which an army could rally and charge. Initially, I intended to work in watercolor and then make some digital enhancements. Justin Gerard is a great example of an illustrator who often works this way. Justin’s work has a sort of whimsy that I wasn’t really looking for, though, and I made the mistake of also looking at some fully digital work from Blizzard projects and things like that. I started covering more and more of the watercolor underpainitng with digital, but still trying to leave some of the texture showing through. The result was turning into a horrible hybrid that did no justice to any of the styles, or concepts that inspired it.

This is one of those instances where I hesitate to share some of the images from this process. But, since I make fun of people on social media who only share the best parts of their life, and only the most flattering photos of themselves, here goes.

First up the Drawing and watercolor underpainting.

Next is my first pass of digital “enhancement”. At this point I was realizing that I hadn’t done my drawing and underpainting large enough and with enough detail to leave this much of it showing. 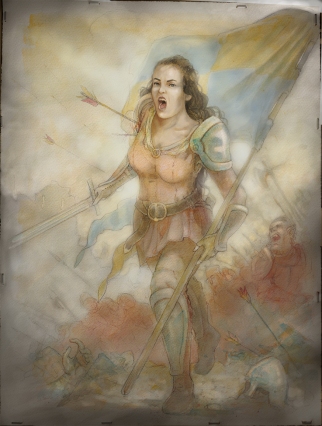 I started adding more and more digital color etc. But I wasn’t willing to go full opaque digital, I was still trying to keep texture and color from the underpainting—I was also having a hard time forcing myself to zoom in and get the details right.

Like I said it all turned into a frustratingly horrible hybrid that made me wonder how I ever thought I could make art. I then decided to give it one last try. I would go back to the physical watercolor painting, seal it, and paint the whole thing in oils. There were definitely some draw-backs to this. The texture of the paper wasn’t may favorite, and I was limited by the original scale. But, at least it was a medium that sort of makes sense to me.

I immediately felt a little better when I put down the stylus and picked up a paintbrush.

Like I said, texture and scale were limiting, but I feel like this is 147 times better than my digital attempts. I learned some important things from the experience. First, pick a style and stick with it (at least for the course of one painting). Next, if you want to do all Justin Gerard you need to draw and paint at a scale where you can get all the detail. If you want to go all Blizzardy you need to be willing to go full out opaque digital. I’m not giving up on that either, I’ve been practicing my digital painting skills and have already produced some studies that are more appealing than where this project was going. Maybe I’ll post one of those next.