If you are reading this on my blog page, you might have seen the masthead which reads “Gardner Art and Stuff”. I do a lot of posting about my own art, illustration and photography. Well here’s one of the occasional “and Stuff” articles.

There’s a local band called Fictionist that has been one of my favorites for quite some time. I first saw them at the BYU Battle of the Bands in 2007 and again at a show in spring of 2008 before I left on an LDS mission to Ukraine for two years. When I got home, they were still playing and the music had only improved. I’ve been following them ever since and have tried to make it to any show they play in Utah Valley. They signed to Atlantic Records in late 2011 and since the EP they released that year, I’ve been waiting for new music. Finally, after breaking with Atlantic, they have a new album scheduled for release on October 7.

I’m excited—after 3 years of waiting there’s a new Fictionist album, but, I’m nervous. Leading up to the album release they’ve put out two new songs with music videos. The most recent “Lock and Key” lacked the dynamic energy and emotion that has attracted me over the years. To illustrate  the difference, I’ve tried to create little graphs showing what I perceive to be the level of emotion and overall energy throughout “Lock and Key” and also “Great Escape”, one of my favorites from the pre-Atlantic era. I know it is difficult to be too scientific about what makes music appealing. If you try too hard at that, I think you end up with Disney Channel stars… but, this is my attempt to quantify the intensity of music (this combines volume, rhythm and tempo etc.) and the level of my emotional response. 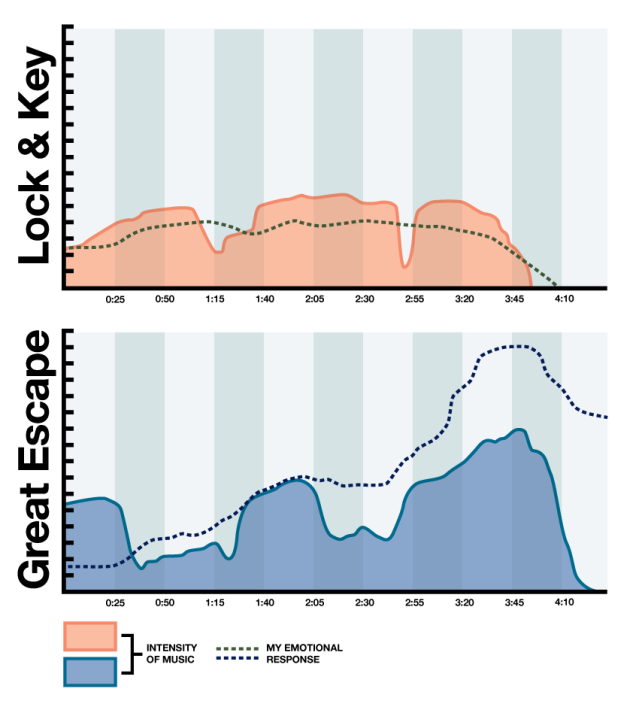 Please forgive any inconsistencies in timing—these are transcribed from little graphs I drew by hand while listening to the songs. Obviously this is just my personal take on these tracks. Different people respond to different things. I’m just hoping that Fictionist is saving their best for the album release, because I wasn’t really touched by Lock & Key. As one of my childhood heroes Levar Burton always used to say, though, ” you don’t have to take my word for it”. Check it out for yourself. Just be sure to give it at least one listen with your eyes closed and no distractions.

If you want to compare to some other sweet Fictionist tunes, I’d recommend Great Escape, Still Reaching, or Human Wings for a start. You can click those links to Youtube, or  find them on the iTunes store.

Don’t hesitate to visit www.Fictionist.com either.