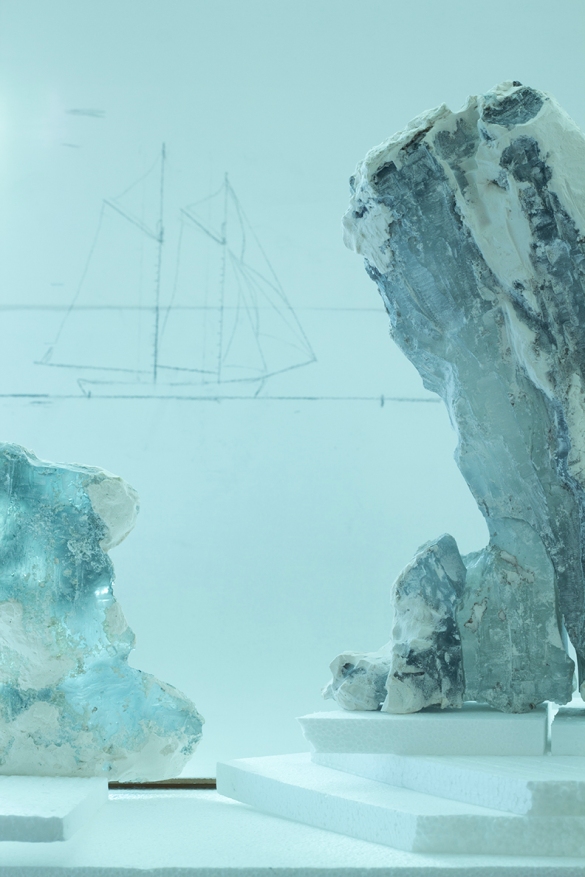 Now that we are back from our little adventures, I am back to work on the iceberg scene. I have been building the set and was finally able to sketch the schooner onto my backdrop to take a few composition photos with the icebergs. If you haven’t been following, the icebergs were cast from resin in my own custom plaster molds.

I just finished building the backdrop, which is more or less seamless, so that once I add the ice flows around the base of the bergs, I will only need to paint the backdrop and let forced perspective do it’s magic.

The backdrop panels are masonite attached to a pine frame. I shaped the curve in the lower panel by giving it a hot bath for a couple hours and letting it dry in a form. I plan to have the final photos for this shot by the end of the week. 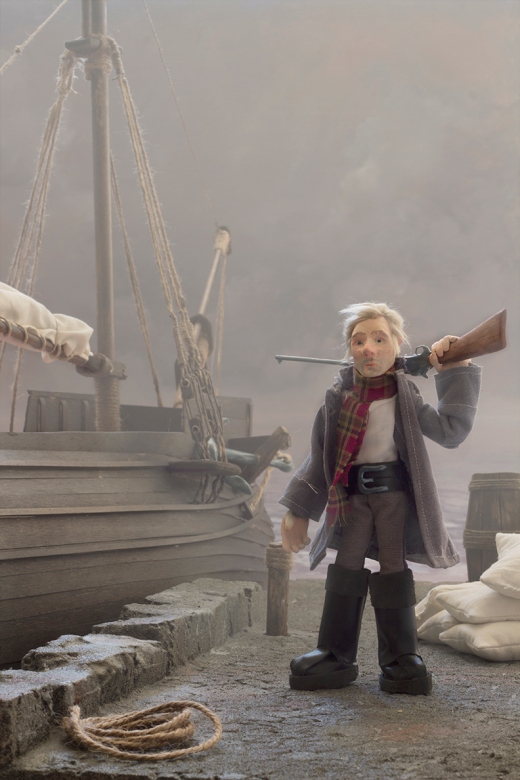 Yep, here’s that same old dock scene. All custom built miniatures and painted backdrop. I still haven’t done final touchups, but the foggy and fog-free images are composited. Soon it will be ready for print.

I am also building structural elements for the iceberg scene, photos of that will be forthcoming.

I don’t have the very final image composited yet, but I did take the photos. This image is the foggy version of the final shot. After I took several shots with my regular lighting/environmental setup, I took several with different levels of fog—created by my fog machine. I was sort of afraid the neighbors might get concerned when I turned the fan on to air it out and smoke started to billow out of window. Apparently, they have seen me doing enough strange things that they weren’t concerned.
I will be compositing one of the non-atmospheric shots with this one so that I can control the depth and atmosphere and still be able to work with full contrast where I need it.

Sorry I am not revealing everything at once.

Well, the icebergs are done. That is a big step for this next image. The translucent greyish bluish parts are cast from resin in my custom molds. The whitish snowish looking parts are plaster that I left on the resin.  The smaller berg was broken out yesterday and was relatively easy. The mold for the bigger one wasn’t sealed properly and so the resin soaked into the plaster. That meant it didn’t break out and I had to grind it down to the resin, which took forever.

These are two cutter bits that I bought for my rotary tool for this job.  The one is unused and the other was used only to get larger iceberg out. 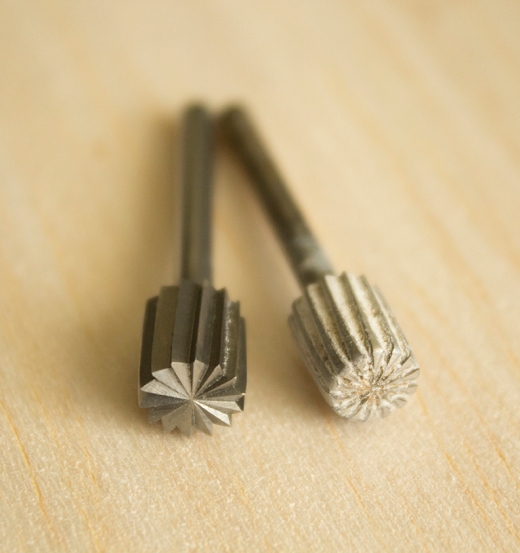 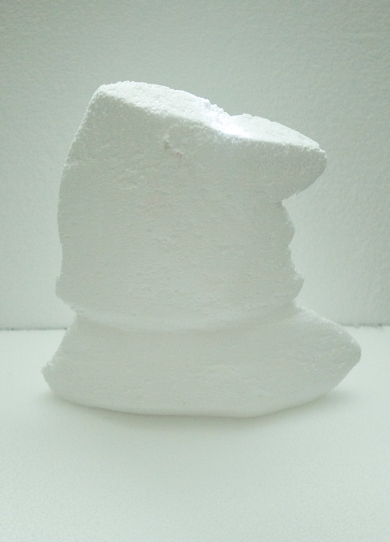 So, I am making those icebergs that I was researching previously. I have experimented a lot with molds and casting recently to make my little man’s head. Many of the methods I tried failed, despite the guarantees on the packaging that they would be fast and easy. None of them seemed like they would work very well for casting an iceberg 50 times the size of the head.  So, I made up my own way… it wasn’t fast or easy either.

I used a “lost styrofoam” method. I carved my iceberg shape from styrofoam and then encased it in a layer of plaster.  I wrapped the plaster in aluminum foil (hoping that would make it easier to break free later) and then poured another layer of plaster on top of that.

To remove the styrofoam, I used a blow torch. Probably not very environmentally friendly, but I won’t be trying it again, because it wasn’t very eye or lung friendly either—despite my use of safety glasses and breathing mask.

Once the foam was gone I coated the inside with a clear poly-acrylic spray and then a casting conditioner.  Then, I poured the clear resin, into which, i had mixed a little blue pigment shaved off of a nupastel.

The images here are from my second berg.  The first is finished, but had a few issues that I hopefully prevented in the second.  I haven’t broken it out of the cast yet. I am doing that later today so come back tomorrow or just follow the blog to find out how they look!

Oh, and yes, I am holding the mold upright with juice cans.  Juice is a great way to drink something sweet without a lot of added sugar, carbonation or caffeine and pears are a natural source of fiber 😉 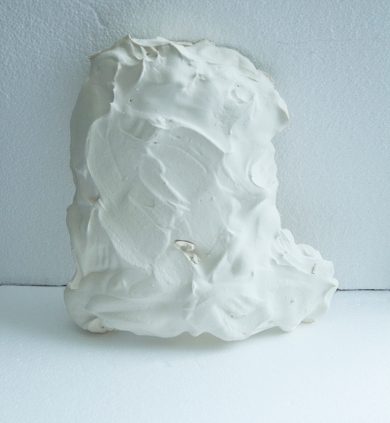 This still isn’t the final image. However, I have most of the elements finished and am setting them up. I still have the painted backdrop to add and need to figure out the lighting. Luckily, because everything in the shot is static, I can use a longer exposure and don’t have to worry as much about getting daylight levels with my lights in the little back room studio.

Things are coming together, I just need to finish this one off and then get moving on subsequent images 😉  P.S. If you haven’t been following my blog hitherto, everything pictured here is hand made, custom for this illustration.

As I have been saying in some of my recent posts, I am working on building miniature sets and models to create a series of illustrations.  This image isn’t from that series, but it was a sort of test run to see if the concept was a valid way for me to work.  I also wanted to try submitting something in that style to the Society of Illustrators Student Competition.  It just so happened that the day I started working on the image was also the deadline for the competition. that means I had to finish it in a matter of hours and get it photographed before the sun went down.

I ended up cutting a lot of corners on the construction.  I had to give him a bundle of dowels to carry instead of the rifle I had been planning on making. I was also planning on photographing him at a frozen lake. Unfortunately, the road to the lake was closed for construction.  I decided I would try to take some shots next to the railroad tracks where I had stopped. I was soon sent away by a railroad worker who informed me that I was trespassing and might distress the train engineers because, apparently, people who wander near railroad tracks sometimes have tragic intentions.  The light was then failing and I decided my only option was to cross the valley and drive up the mountain to a point where the sun would still reach me.  I did and this is one of the shots I got (magical sparkles added for emphasis).

Anyway, it wasn’t accepted to the Society show, but I had a good time making it, and learned some things that are proving useful in my current endeavors. 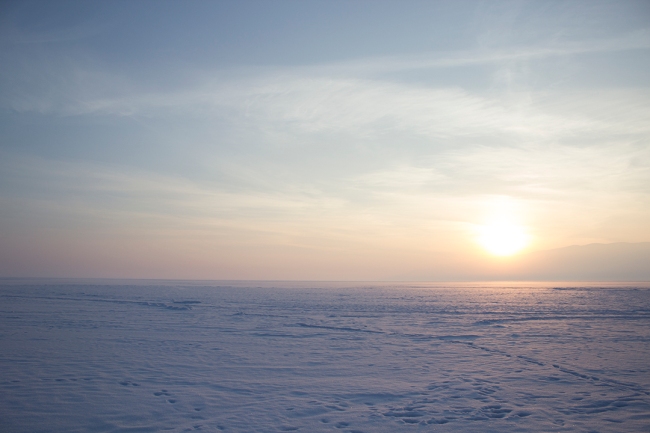 In addition to watching documentaries and looking at pictures, I thought I would do a little first-hand research this past winter. Since I spent all of my money buying art supplies, I couldn’t afford a trip to the arctic. Instead I drove down to Utah Lake.  There weren’t any polar bears, but with temperatures 20 degrees below freezing I imagine it wasn’t too far off from April in the arctic. It didn’t help that I was only wearing moccasins, a blazer and socks on my hands (oh and pants too, in case there were any questions).

I’ve also finished the stone quay, from which my miniature man will be departing on a seal-hunting schooner. Now, don’t anyone get uptight, the story is set in 1860, back when seals were valued only for their coats and blubber. They hadn’t realized yet that cuteness is more valuable—therefore not to be shot or clubbed.

Anyway, the quay is made of styrofoam, which I carved, covered in plaster, textured with spray-on-stone and painted.

The photo’s above are from my not so arctic, but plenty numb adventure.  The one below is my mini-quay.

Having completed most of the work on the ship, I turned my attention to creating the main character.  I already had sketches of how I wanted him to look, so, it really came down to figuring out how to realize that in mini, 3d form. 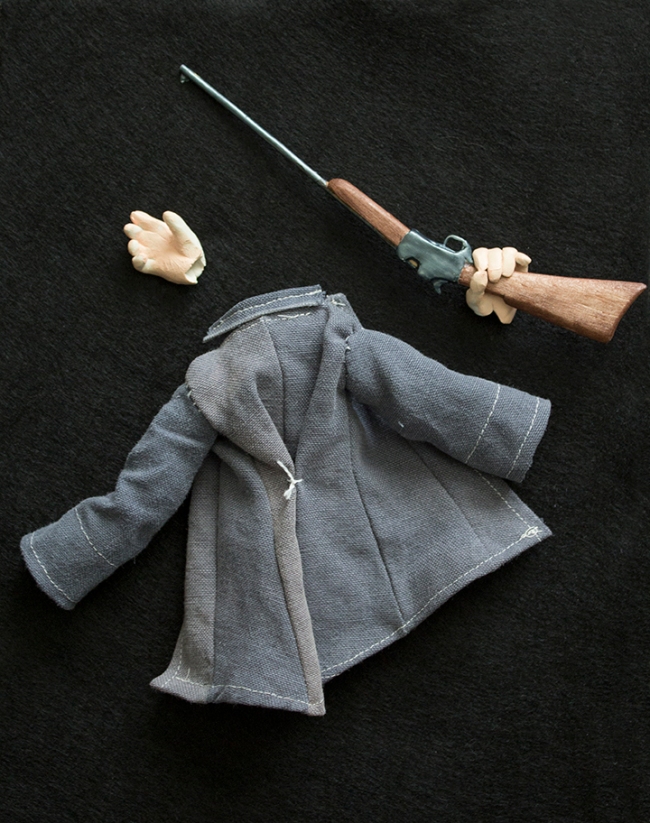 I decided that, to save the trouble of custom building a posable skeleton, I would build my character on an articulated wooden maquette. I removed the head, shaved the hands into little stumps and started sewing mini clothes. His trousers and coat are made from a worn out pair of my old shorts and I made boots and belt out of some leather pants that I couldn’t see myself wearing in public.

I made his hands out of sculpey, molded to fit the wooden stumps—which is really nice, because they fit snugly, but are easily removable for changing clothes etc.

His rifle is an based on an 1860 Allen & Wheelock drop breech. I was a little concerned about how I would make the bamboo barrel and sculpey  receiver look metallic.  Then, I remembered my wife’s “gun metal” nail polish.  It worked perfectly. 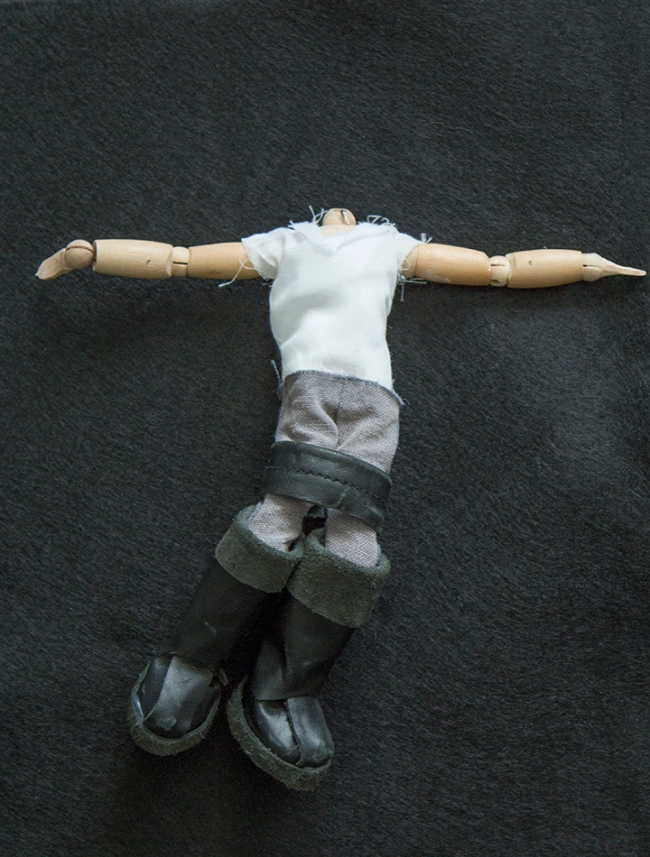